Mazabi has acquired two commercial assets that are located on Tenerife and on Palma de Mallorca. The company thus continues to its strategic growth plan, adding more than one million euros of net income to its portfolio.

The manager has closed the acquisition of a medium-sized retail located northeast of the island of Tenerife, in the commercial area of La Laguna. This property has 5.892 sqm and an authorized sales area of ​​4.995 sqm. It also has a warehouse of 5.366 sqm.

Both spaces add up to almost 11.300 sqm and occupy two floors of a six-storey commercial asset built in 2010. The entire area is rented to Conforama, which has been a tenant in the store since 2012.

La Laguna is the most powerful shopping area on the island of Tenerife, where there are also operators such as Ikea, Leroy Merlín, Decathlon, Alcampo, Mc Donald’s, among others. In addition, in the same commercial building are Kiabi, Kiwoko, Merkal, Base and El Corte Inglés Outlet.

In addition, Mazabi has also formalized the purchase of a commercial premises located on Calle General Riera 125 in Palma de Mallorca. It is an isolated single-storey rectangular building forming a commercial unit, with a constructed area of ​​1.780 sqm. The building has 50 public parking spaces. Since March 2016, the premises have been rented to Maison du Monde.

The company aims to continue growing organically and also through joint ventures with institutional investors, and with the aim of increasing its assets under management from 1.7 million euros to 3 million in a period of three years. Growth is not only expected in Spain, but also in different strategic locations in Europe. 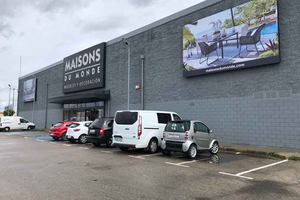