The real estate company Civitas Pacensis has acquired the land of the old Coca-Cola bottling plant, on Elvas avenue, according to Civitas Pacensis website. Although the details about the plan for this plot of more than 36,000 sqm and residential use of a height haven’t been communicated yet, their purchase reinforces the commitment of this promoter for Elvas Avenue, where this year it plans to build 500 apartments, of which 250 are already they are underway.

The Coca-Cola factory was closed in 2009 and since the facilities were left unused there has been much speculation about its fate. The plot adjoins the old Murano salons, which were also owned by Civitas Pacensis until it sold them to Chiron for the new hospital, in which an investment of around 50 million euros will be made.

Civitas Pacensis has invested more than 30 million euros in the purchase of land, the majority in Badajoz, without borrowing from the banks. The most ambitious project is the Civitas Campus, with more than 2,700 homes behind the university campus, where it has 54 hectares, which aims to become a "sustainable neighborhood" and change the model of urban planning and life in the city. Although this action was the first that the promoter presented, the required modification of the Municipal General Plan (PGM) is delaying the initially planned deadlines and it will not be until next year when it can begin.

Meanwhile, other developments continue to advance on Elvas avenue, such as the Geim 1 Tower, whose works began last November and 70% of the 52 homes are already sold, or the Geim 2 tower, which will begin to be built in brief, among other projects.

Civitas Pacensis was born three years ago. Its president, a native of Badajoz, saw in the city a potential and a "unique" opportunity to settle with a long-term project, arguments that convinced investors from Madrid, Barcelona and Valencia, who embarked on this "adventure", like he himself has defined it, willing "to grow without debt" and, therefore, at the pace set by the needs of the city itself.

GS invests €12M in land in Seville and Cádiz

Mapfre sold plots of land in Madrid to Gestilar for €106M 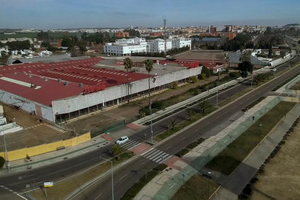