DWS, through one of its German real estate funds, reached an agreement to acquire a housing development consisting of three buildings in Barcelona from developer Culmia for 80 million euro.

With this latest operation, DWS’ Build to Rent portfolio in Spain reaches 416 million euro, only six months after its first operation within this segment. The company joined Pryconsa and Gestilar in two mega-operations, which have placed it on top of this segment. This will be Pryconsa’s first BTR operation, developing a 180 dwelling project in Vallecas (Madrid) for DWS.

With Gestilar, DWS will develop 750 dwellings for rental in Getafe and 280 in Ensanche de Vallecas, which will be sold to funds managed by DWS. Total investment will be 240 million euro.

The project now acquired is located in La Marina del Prat Vermell, an urban renewal area in Barcelona with great potential and where 10.800 dwellings are expected to be developed over the next ten years, both free and social housing.

There are already headquarters of important companies set up in the area, such as Aguas de Barcelona, Esteve and the newly released Generalitat’s Administrative Campus. The operation is part of the alliance between DWS and its managing partner, Urban Input, which will manage the future dwellings through a specialised team.

Daniel Gálvez, Head of Real Estate Iberia at DWS pointed out that: «with this new project, DWS continued reinforcing its bet on the Build to Rent segment in Spain and in Europe. In the future, we will continue to invest in high quality, sustainable dwellings with excellent locations and, above all, affordable».

On the other hand, Culmia was the result of the sale of developer SDIN’s former terrains by Sabadell to Oaktree for 882 million euro and a set of real estate assets, mostly terrains for urban developments. The terrain portfolio was estimated at 1.3 billion euro. In total, 200 million euro corresponded to non-housing terrains or developments with less than 50 dwellings, which Oaktree considered non-strategic and decided to sell.

Francisco Pérez, Culmia’s managing director, explained that «this operation confirmed once again the market’s interest on the Build to Rent segment. A model at its peak which we at Culmia observe with great interest and which is expected to contribute, in the coming years, to improve accessibility to dwellings, in particular in the big cities».

DWS sells a prime office building in Madrid for €55M

Culmia will invest €92.7M in Solana de Valdebebas in Madrid

Neinor and Visoren compete for the Barcelona VPO mega plan

Bitcoin increases its presence in the housing market

Vía Célere to launch a Build to Rent portfolio with 2.431 units 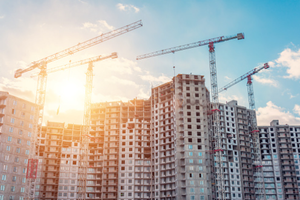