Two years ago, the two companies made an alliance to develop senior residences in Spain and Portugal. And now, the fund has acquired 19 of them. The price of the operation was not disclosed, according to EjePrime.

One of the residences is located in Vigo and is operational, whereas the second one is located in Oleiros (A Coruña), and is ready to work as soon as the first residents arrive.

The operation also included two senior residences which will be concluded in the next few months, located in Cartagena and Lleida. The remaining ones are at different stages of development, two are located in Castellon, one in Tarragona, another in Mallorca, one in Tenerife, two in Murcia, one in Ourense, Cordoba, Leon, Oviedo, Seville, Lugo, Elche and Alicante.

Miguel Ángel Pascual, Thor Spain’s general manager, assured that the company’s plans are to open between nine and eleven residences per year with an investment of around 100 million euro.

Currently, the company’s pipeline has around 10 projects corresponding to around 2.000 beds in Malaga, Badalona, Esplugues, Seville, Huelva, Leon, Salamanca, Valladolid and A Coruña.

Up until now, the company’s plans have been focused on senior residences, but it already has two medical proposals in Madrid and Ecuador. The company is also analysing senior residence projects in Portugal and the United Kingdom.

Cofinimmo invests €13M in an elderly residence in Alicante

Care Property purchased a senior residence in Alicante for €35M

Confinimmo purchased a senior residence in Bilbao for €9M

Ratisbona to invest €6M on a new senior residence in Alicante

Almagro Capital arrived to invest in right of use housing 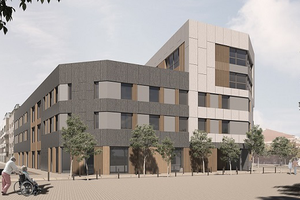