Sonae Sierra acquired exclusive control of Imosal, the company that owns Atrium Saldanha. The retailer thus becomes the new owner of the office and commercial building in Lisbon. The purchase of the company in the Fibeira universe, Imosal, was communicated last Friday to the Competition Authority.

«The Competition Authority received, on August 24, 2022, a notification of a merger between companies (…). The concentration operation consists of the acquisition by Sonae Sierra of the exclusive control of Imosal – Imobiliária do Saldanha”, according to a statement quoted by Eco.

Although the final value involved in the transaction is not yet known, according to some market sources by Vida Imobiliária, the building will have reached the market with a asking price of more than 200 million euros. As advanced in December, Sierra would acquire the building through Sociedade de Investimento e Gestão Imobiliária (SIGI) Ores, owned together with Bankinter.

Opened in 1998, the Atrium combines a commercial gallery with 59 stores and nine floors of offices. Located in the heart of the CBD of Lisbon, in Praça Duque de Saldanha, it occupies almost a block at the confluence of avenues Fontes Pereira de Melo and Casal Ribeiro, with a gross building area of ​​66,000 sqm, spread over 12 floors above ground and 6 parking spaces. in basement.

Atrium Saldanha in the crosshairs of Bankinter and Sonae Sierra 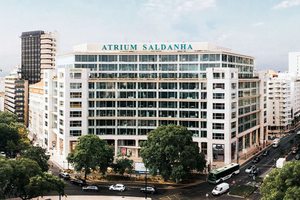 Sonae Sierra is the new owner of Atrium Saldanha