Consultant CBRE announced this Wednesday the conclusion of this operation which had already been announced at the end of June by market sources consulted by newspaper Cinco Días. The newspaper Expansión released this Thursday that the price of the asset was 110 million euro.

This is a 7-floor building located at the intersection of two streets within the Spanish capital: Velázquez and Goya. Its 7.507 sqm are spread across office spaces, a retail unit on the ground floor, a 500 sqm terrace, a 140 sqm attic and 49 parking spots.

The building is currently 50% pre-rented by 4 companies which will occupy the retail unit and 3 offices. The marketing of the spaces is assured by consultant CBRE, which also advised the deal on behalf of Rex Spain.

For the Director of Real Estate for Iberia at Zurich, Salvador Pérez Soto, this is «a high-quality building, following the Group’s ESG standards and with a significant potential within an area that offers stability and safety for investment», he revealed in a release published by the insurance company itself.

This operation shows once again the confidence and interest Zurich has for sustainable and efficient assets and completes its portfolio following its last big real estate operation, the acquisition of Illunion’s 5 office building portfolio at the start of 2019.

Grupo Rosales bought this building from Banco Popular for 60 million euro in 2018. Since then, the developer refurbished the building completely, a process which was supported by architecture studio Rafael de la Hoz. The final result was awarded the LEED (Gold) sustainability certification, revealed the consultant.

This operation was concluded during the pandemic and Zurich’s REX Spain was legally advised by Roca Junyent, and technically advised by Homu Project. For CBRE this deal «shows that the confidence and interest investors have for prime assets, such as Velázquez 34, located within what is probably the best commercial corner in Madrid, continues». 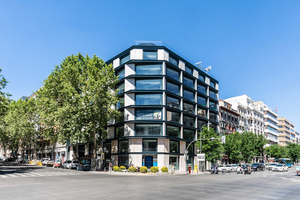