The building has almost 8.000 sqm spread across 14 floors above ground and three floors below the ground with 158 parking spots and it currently hosts Community of Madrid’s Family Courts’ headquarters.

As the name indicates, the building is located at number 10 Calle Francisco Gervás, only 100 metres away from Paseo de la Castellana, one of Madrid’s main office axis.

This building has been on the market since August and was estimated to be worth around 70 million euro. But already back then, newspaper Expansión alerted for the fact that, according to market sources, the building’s value might be negotiated below the estimated amount due to adjustments generated by the pandemic.

Consultant Savills Aguirre Newman advised the sale and considered that this operation «confirmed that prime locations remain the national and international investors’ goal in the area», it can be read in a release.

Savills Aguirre Newman further predicted that 2020, despite all its setbacks, will end with an office investment volume of around 2.3 billion euro, of which more than 80% was foreign capital which remains confident on the solid Spanish office market’s fundamentals.

Offices to be developed in former El Corte Inglés center

€70M office building placed on the market by Zurich 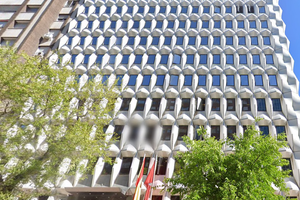