Located at number 3 Calle del Ombú, in Madrid, the building was sold by the Riberas family, according to newspaper Expansión. Consultant CBRE took part in the operation which was concluded this Wednesday after more than 10 months of negotiations.

The 13.141 sqm Ombú Tower has 14 above the ground floors and 4 underground floors, where the 235 vehicle parking lot is located. The asset is exclusively dedicated to «office rental» offering 12 rooms with different formats and services, it can be read in the building’s official webpage. Its location next to Estación Sur de Méndez Álvaro train station and side by side with the M30 motorway makes it accessible both by private and public transport.

InmoCaixa is a company that belongs 100% to CriteriaCaixa, an unlisted investment holding company, that manages the assets of the "la Caixa" Banking Foundation. It has under its charge more than 20.000 properties for rent and sale, belonging to CriteriaCaixa.

This is one of the largest transactions on record in the Madrid office market during the last 12 months. The purchase of building Velazquez 34 for 110 million euro by Zurich was one of the other major transactions carried out in the capital recently.

It should be noted that up until September investment in Madrid surpassed 700 million euro showing a 153% recovery when compared to the previous quarter when transactions were frozen by the pandemic. Despite the ups and downs, the office market remains a favourite for investors who choose Madrid for their investments, since it represented more than half of all investment during this period and during the last 12 months, as shown by Iberian Property’s latest report. 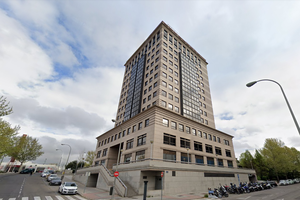