Home Capital has invested 10.7 million euros in the acquisition of a building in the Salamanca district of Madrid. This figure does not include taxes or investment in its reform. The 3,223 square meter building is located at number 20 General Pardiñas Street.

With this acquisition, the Socimi owned by the Polanco family now controls a portfolio made up of nine assets: seven in the city of Madrid and two in Barcelona.

Home Capital debuted in March 2020 on BME Growth, formerly MAB, at a price of 8.36 euros, valuing the company at 50.2 million euros. Founded in 2009, the Socimi is 26% owned by Timón, the Polanco equity company, and is chaired by Borja Jesús Pérez, who in turn has an indirect 6.8% stake in Timón. The company's management team is made up of Rafael Aritio, Francisco Bullón and Alberto Comenge.

The Socimi closed last year with revenues of 246,000 euros. Along with the impact that the Covid-19 pandemic has had on its activity, it must be taken into account that only two assets have been 100% operational this year. The average occupancy of Blasco de Garay 32 has been 46%, while Gignàs 26, in Barcelona, ​​has had an average occupancy of 32%.

The company seeks to cover the gap between the hotel offer and the temporary rental. Home Capital estimates that the average stay of tenants is 2 to 4 months and that the business model allows a higher profitability than traditional rental and, at the same time, minimizes regulatory and non-payment risks.

Aedas Homes delivers a Build to Rent project in Madrid 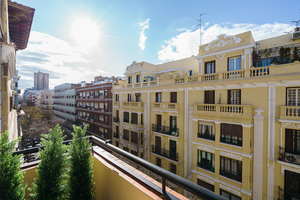 Home Capital buys a residential building for rent in Madrid