This operation was, most likely, concluded at the end of October. According to local newspaper Alicante Plaza, the family office should spend a further 12 million euro on the asset’s refurbishment, so it can reopen its doors as a luxury boutique hotel managed by the brand One Shot Hotels.

Up until now, the 7-floor building located at Avenue La Rambla in Alicante had several uses: residential apartments, offices and shops on the ground floor.

The family office will not be alone in this investment whose total cost will reach 20 million euro since it should have the support of fund Nazca Capital, which become one of the company’s shareholders last December. With the fund’s entry, the family office gained liquidity to develop 12 projects of the same type within other Spanish cities until 2023.

Hotel chain One Shot Hotels currently has 10 hotels in Spain: 4 in Madrid, 3 in Valencia, 1 in Seville, 1 in San Sebastian, and 1 in Barcelona (to open soon). This new space should be the chain’s eleventh in the country. Beyond the Iberian horizon, the hotel chain should also open soon a unit in London, the One Shot Victoria 82.

Hotel Bless Collection in Madrid is on the market for €135M 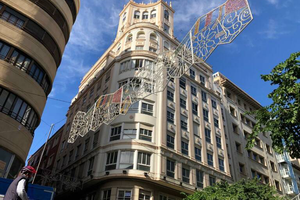