Consultant JLL and Knight Krank also took part in this transaction representing the Spanish REIT, and consultant CBRE advised Prologis in this operation.

The portfolio consists of a set of logistic assets with a total combined area of 574.462 sqm located in several Spanish cities. According to newspaper El Confidencial, among the main cities are Madrid, Barcelona, Guadalajara, Tarragona and Seville.

Blackstone and Deutsche Bank also offered bids close to 400 million euro for this portfolio. But after Prologis gained the exclusive terms of negotiation over the portfolio, both companies withdrew from the race.

This portfolio was placed on the market by the Spanish REIT in March. According to the same newspaper, this decision comes at a time when the company intends to focus its activity on office buildings, in particular those located in Barcelona, Madrid and Paris.

Colonial is about to conclude a €150M purchase

Blackstone: Espacio León is on the market for €100M

Blackstone and Prologis are interested in Colonial’s logistic assets 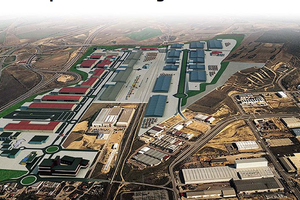