The companies started negotiating this logistic portfolio, which includes 18 assets estimated at 425 million euro, in mid-June last year. The first stage of the sale was concluded only two months later, during the Summer, and concerned the sale of 11 logistic units for 261 million euro. According to El Economista, the remaining 7 units, which have a total combined area of 159.000 sqm, were now traded for 164 million euro.

Advised by consultants JLL and Knight Frank, the Spanish REIT thus closes the logistic segment’s divestment cycle, with one of the segment’s largest operations during the last few years. «With the execution of the second stage of this operation, Grupo Colonial increases its liquidity in more than 100 million euro thus reinforcing its solvency even further», revealed Pere Viñolas, Grupo Colonial’s managing director.

For Prologis, «this purchase represents a «reinforcement of its presence on the Iberian Peninsula, especially in the Henares Corridor, between San Fernando de Henares and Guadalajara», stated Cristian Oller, country manager for Prologis España.

There are 2 further logistic units located in Catalonia, one with 42.253 sqm located at the Constantí industrial park and the other with 26.026 sqm located in Valls – both near Tarragona. The portfolio also includes a 51.666 sqm logistic platform located in Dos Hermanas, in Seville.

For Prologis this operation – on which it was advised by CBRE and Clifford Chance -, is part of its strategy to expand its portfolio which already has 57 assets spread across Madrid, Barcelona and Valencia and which are currently estimated at 1.2 billion euro.

Colonial’s portfolio devalues 0,2% due to the crisis 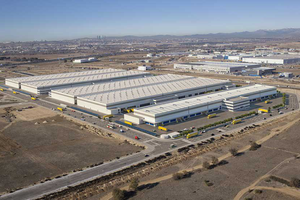