The complex has 213 apartments, a glamping, five restaurants and bars, sports facilities, swimming pools, a spa and parking. It is located within the municipality of Tossa del Mar, in Catalonia’s Northeast and it will be managed by Med Playa.

The fund plans to invest 40 million euro on a full reform and expansion of its existing facilities both in terms of hotels and camping.

The hotel currently hosts 213 apartments and Azora plans carrying out a very ambitious reform plan intending to reposition the asset and achieve a 4-star qualification. The reform will be carried out in two stages, the first should start in November, when this season is over.

This investment is the first operation since the fund’s first closure, with 680 million euro, last Summer. Giverola Resort was added to Azora European Hotel and Lodging, FCR’s portfolio which already included another 10 hotels, around 2.670 keys and 4 hostels with an offer of around 1.200 beds, located in Spain, Portugal, Italy and Belgium.

With an initial closure of 680 million euro and a maximum limit of 750 million euro, the Fund has a total capacity of more than 1.5 billion euro to invest on hotel and leisure opportunities across Europe, although it is expected that a significant part of the portfolio will be located in Spain, since it is the most popular «sun and beach» destination in Europe.

Mónica Garay, senior partner and director of the hotel department at Azora, commented that «after having raised the initial capital for our last hotel fund last Summer, we patiently observed the segment under the pandemic while evaluating a series of opportunities»

This acquisition, which was the first made by the fund since its investment portfolio was created, «allows us to completely reposition a hotel complex, which is extremely well located and within an area which is a popular destination for both national and international tourists».

IHG will invest €14M in a luxury hotel in Barcelona 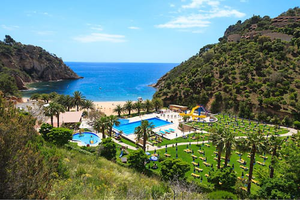 Azora concluded, in Costa Brava, the purchase of its first hotel fund