The firm Avalon Properties, a subsidiary of the North American manager Ares Asset Management, has closed a new acquisition, a portfolio of five residences for rent in Vallecas, Madrid.

According to Brainsre.news, it has paid 60 million euros for the five turnkey developments. The operation has been financed with guarantees provided by holding companies. Locally, an agreement with Bankinter is included.

Aménabar will be the developer in charge of the development, in an off-market operation that has been advised by TC Gabinete Inmobiliario.

The star plan that the firm must develop is the Vive Madrid Plan. Avalon, in the hands of Aedas Homes and Grupo San José, both with a very small minority; achieved the award of two lots, which will involve the development and operation for 75 years of a total of 3,600 homes, in which it will invest more than 400 million euros. 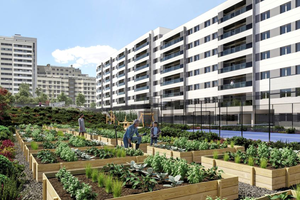