Iroko Zen increases its real estate portfolio in Spain with the acquisition of two logistics warehouses in Guadalajara and Bilbao in separate 'sale and leaseback' operations for a period of ten years.

Supermarkets, offices leased to the State and now warehouses. The French socimi is becoming increasingly active in the Spanish real estate investment market, where it has just invested 13.7 million euros to acquire two logistics assets from Teknia Automotive, a Spanish group specializing in the manufacture of automotive components and spare parts for the main manufacturers or subcontractors worldwide.

The first of them, with 10,000 sqm, is located in the Alcarreño municipality of Azuqueca de Henares, 45 kilometers east of Madrid, in the Miralcampo industrial zone, where companies such as Prologis, Mercedes-Benz, MRW or Carrefour are located. The second property, with 10,372 sqm, is located to the north of Bilbao, in the El Abra industrial estate, 200 meters from the Gallarta train station. Companies like Caterpillar or Man Trucks are located there.

Both properties exceed 20,000 sqm and have been acquired in an outsourcing operation (sale and leaseback) that has involved the signing of lease contracts with a firm commitment term of ten years with two renewal options, of five years each, for a total of 20 years.

This investment will allow Iroko Zen to collect a total income of more than 850,000 euros per year, which, according to the socimi, will mean "an immediate rate of return of 6.1%".

The socimi made its first investment in Spain in July 2021, with the acquisition of a Dia supermarket in the center of Barcelona, ​​leased from the supermarket chain until 2038. And in December it sealed the purchase of its second asset in the Spanish market, another supermarket from the same group, this time in the Asturian city of Avilés and with a lease that ends in 2033.

In March, Iroko took over an office building located in the heart of Madrid and fully leased by the Ministry of Inclusion, Social Security and Migration for a period of five years.

Looking to the future, the company has set its goal in our country. As Charles Duclert, co-founder of Iroko, explains, "Spain has the advantage of offering good real estate opportunities and will allow the goal of 30% of invested assets to be reached by the end of the year in the euro zone. New acquisitions are being closed in Spain and Germany, and we are exploring new opportunities to open new markets in Portugal, the Netherlands and even Ireland."

Iroko Zen buys offices in the financial district of Madrid

Panattoni buys land for its second logistics project in Guadalajara 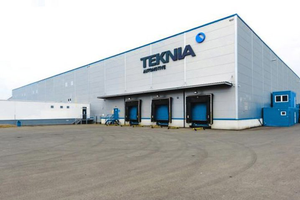