The operation, whose numbers were not disclosed, was advised by consultant 3 Capital. The hostel is currently being refurbished so as to reposition itself. Estudio Crude is in charge of the refurbishment and the hostel is expected to reopen in June.

Oriol Serra, Smart Rooms Company’s CEO, assured that: «We have a clear bet and we will fight to carry it through by adapting ourselves to our surroundings as competitively as possible and the idea is to keep growing within prime locations both in Spain and Latin America».

UMA Suites & Hotels is Midscale’s brand for hotels, boutique hostels and tourist apartments owned by the company, which, with the incorporation of the new hostel, will now have five establishments in Spain.

Of those, four are located in Barcelona and one in Madrid, the UMA House Atocha, which opened in February 2020, just before the pandemic and represented an 800.000 euro investment, featuring 17 rooms.

Entry within the co-living segment

Only three months ago, the company entered the co-living segment with the inauguration of a 28 floor building in Bogotá (Colombia). This project, under the brand The Spot had a global investment of 20 million euro and offers more than 500 beds through an innovative co-living concept, for students and professionals with hostel.

Smart Rooms Company, established in 2012 by three entrepreneuring partners led by Oriol Serra, manages a total 900 bedrooms and seeks to surpass 2.000 rooms within the next four years, according to its strategic plan. The company’s main headquarters is in Barcelona and it also has offices in Bogotá. 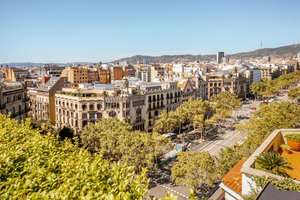