The residential Socimi linked to BMB Investment Management has sold off the General Moscardo 7 building in Madrid. Although the price of the transaction has not been disclosed, the building was valued at 23.5 million euros.

The manager led by Josep Borrell and Ignacio Pigrau has accumulated eight real estate funds since its foundation in 2006. Optimum III began its operation in 2016 and, as of December 31, 2020, accumulated twelve residential assets for rent in Barcelona and Madrid for value of 139.75 million euros, according to Gesvalt's appraisal. The fund is fully invested.

Throughout 2020, the investment vehicle was detached from General Moscardó 7, in Madrid, a residential building with 40 apartments and several premises, as well as parking lots and storage rooms. With an area of ​​5,700 sqm, the building is located in the district of Tetuán, very close to the Azca area.

The price of the transaction has not been disclosed, although General Moscardo 7 was valued at 23.5 million euros as of December 31, 2019. In addition, Optimum III has reported that the fund has closed the 2020 financial year with a profit of 10, 45 million euros, of which 9.4 million will be distributed in dividends among its shareholders and 1.04 million will be allocated to the legal reserve.

BMB Investment Management has launched a total of eight residential investment funds: five for Berlin and three in Spain focused on the Madrid and Barcelona markets. The strategy of the manager is to invest in real estate in central areas of cities, where it locates old buildings that need rehabilitation or that represent an opportunity for various reasons. Once it has added value to the asset, it returns it to the market either with individualized or block sales.

Gesfesa buys land in Valencia for build to rent project 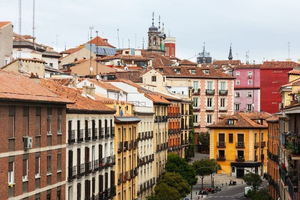