As reported by the company in a release, this new warehouse is fully operational and will complement the activity Mercadona’s distribution group located at the Ciempozuelos logistic centre, was already developing.

The asset in Getafe will serve the provinces of Madrid, Guadalajara and Cuenca. The centre was built to guarantee services to the stores.

Mercadona has 190 stores in the area. With this contract, the company will generate 476 jobs of a total 578 people. In 2020 company investment reached 172.5 million euro.

At the beginning of July, the company announced a 98 million euro investment to expand its logistic facilities in Alicante with a new 53.000 sqm asset built over a parcel with more than 83.000 sqm.

In terms of the company’s retail portfolio, Mercadona concluded last week the sale of part of its real estate assets. Israeli fund Mdsr purchased 27 commercial stores from the group spread across Spain.

The company managed by Juan Roig had placed 36 commercial stores on sale a few months before. With this operation, the company sold a large part of the assets it had placed on the market.

Aldi expands in 13.000 sqm its logistic platform in Barcelona 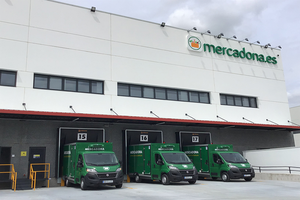 Mercadona invested €28M in a logistic warehouse in Getafe