Mazabi has formalized the purchase of the Soho Boutique Puerto de Santa María hotel in Cádiz, operated by Soho Hoteles. Located in the historic center of the city, on the banks of the Guadalete River, the property has 101 rooms and a three-star category. The company plans to invest more than one million in 2022 to redesign and upgrade both the hotel's common areas and guest rooms. The works will be carried out gradually, so the asset will remain open during the refurbishment period.

The property is located in El Puerto de Santa María, Cádiz. It is situated in a strategic location, in the area of the wineries (Osborne, Grant, Gutiérrez-Colosía) and a five-minute walk from the port. La Puntilla beach is only 800 meters away and the Vista Hermosa golf club is a 10-minute drive away.

On its rooftop terrace there is a swimming pool and a solarium with views of the city of El Puerto de Santa María. It offers a varied gastronomic offer in its restaurant and bar. Its 101 rooms, overlooking the Guadalete River, are individually decorated. They have private bathroom with bathtub and are equipped with air conditioning, free Wi-Fi, TV and telephone. For group activities, the hotel offers meeting rooms and facilities for banquets or celebrations.

This new acquisition comes a few weeks after Mazabi announced in April two operations in the hotel sector: the purchase of a four-star hotel in Menorca, newly built and to be operated by Barceló; and a hotel building located in the center of Madrid, between Gran Vía and Plaza España, to be operated by Room007 Hostels & Hotels.

Following these transactions, the company currently has 19 hotels, with an estimated valuation of 500 million euros. It also has a pipeline through Atalaya Hospitality of another six hotels for an estimated amount of 200 million euros, and is currently in the process of selecting investors.

Mazabi concluded the purchase of a hotel in Cordoba

Global Realty Capital will bet in the Spanish tourism segment 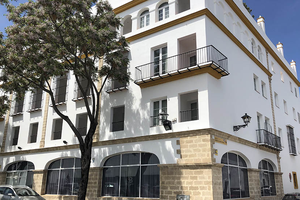