IBA Capital Partners has bought the office complex located above the Glòries shopping centre. The complex, which belonged to Blackstone, is composed of three buildings located in the streets Ciutat de Granada 178, Avda. Diagonal 188 and Gran Vía 866. The three assets have an area of approximately 21.500 sqm and are occupied by more than 85%.

This operation has been advised by Savills Aguirre Newman and CBRE in the selling side, and on the part of the buyer, by JLL, Uria Menéndez, E&Y, Ruiloba Abogados at the legal level, TBA and TAUW at the technical level.

The properties, built in 1995 and with various subsequent reforms, have among their main tenants multinationals such as Kin, Sage, Kyocera, Gore-tex, as well as the Barcelona City Council.

According to the founding partners Jesús Valderrama and Thierry Julienne, with this operation, IBA Capital reaffirms its commitment to the office sector and to investments in well-established, high-quality assets in consolidated locations. The creation of value is thus combined with an adequate and moderate risk-return ratio, in line with IBA's investment policy.

«After closing the first quarter of the year with an investment volume of approximately 185 million euros, we can highlight the rapid recovery of the investment market in Barcelona, with a clear commitment to the 22@ district, where 94% of the total volume has been transacted. In addition, the closure of this operation demonstrates the strong interest shown by international capital in product Core and Core +», says Carlos Bajo, director of offices capital markets Barcelona at Savills Aguirre Newman.

Kutxabank placed its share of Bilbao’s Torre Iberdrola on sale 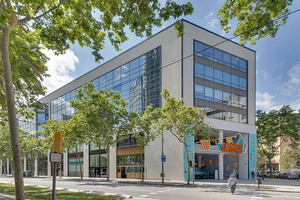