The H10 hotel chain has sold the H10 Ítaca, in Barcelona, ​​in a long-term sale and lease back operation to a local family office. H10 will therefore maintain the management of the establishment in the long term, according to Hosteltur.

According to EjePrime the sale amounts to 20 million euros which represents 200,000 euros per room. The H10 Ítaca, located a few meters from Sants station, is a four-star establishment that has recently renovated part of its facilities, including its 100 rooms and the De Blanc restaurant.

The company currently has three different brands, with H10 Hotels being its original brand and in which it accumulates a greater number of establishments (57), all of them in Europe. Specifically, it has a presence in Germany, Italy, the United Kingdom, Portugal and Spain. In Spain it is in Barcelona, Córdoba, Costa del Sol (Malaga), Fuerteventura, Gran Canaria, La Palma, Madrid, Mallorca, Salou and Cambrils (Tarragona), Seville and Tenerife.

Ocean is the brand created in 2008 for its resorts in the Caribbean. It accumulates five in Riviera Maya (Mexico), four hotels in Cuba, two in Punta Cana (Dominican Republic) and one under development in Jamaica.

Finally, The One is the brand launched in 2017 under which it operates luxury urban hotels. It currently has two establishments under this banner, one in Barcelona and the other in Lisbon (Portugal).

Solar Investment to open new hotel in Chaves in 2022

The sale of Selenta is under negotiation for €450M 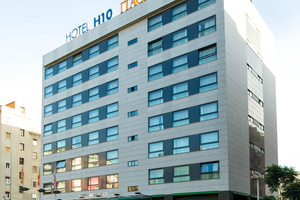 H10 sells the Ítaca hotel in Barcelona for €20M