It will be in this location, next to Plaza de Santo Domingo at the heart of Madrid, that a new 155 room hotel will be built, revealed Spanish newspaper Expansión. The 10.700 sqm location will also offer common areas such as terraces and swimming pools. The cost to refurbish this asset was not disclosed.

The transaction was negotiated with Princeton Investments, the British fund which during the last 5 years transformed the former Telefónica post into a residential building which also hosts offices. For this operation, the fund was advised by CBRE and Uría Menéndez.

The French company should open two new hotels in Portugal by the end of the year.

One of the hotels will be operated by Moxy, the 3 star brand from operator Marriott directed at the younger public and it is located 600 m away Praça Marquês de Pombal and Avenida da Liberdade, two of Lisbon’s landmarks. It will have a total 136 rooms and it will host a swimming pool and a terrace bar.

This information can be found on the French company Boissée Finances’ official webpage, but it does not, however, disclose the amount invested in the buildings’ refurbishment. 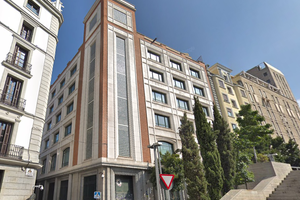