The hospitals are the Álvaro Cunqueiro Hospital in Vigo, the Toledo Hospital, the Can Misses Hospital in Ibiza and the Infanta Sofía University Hospital in San Sebastián de los Reyes, near the Spanish capital. Together these assets offer a total of 3.350 beds.

The education institution is the Universitat de Barcelona’s Law School, which serves 7.000 students, and is located at number 684 Avinguda Diagonal.

The infrastructures are 2 roads which together are 125 km long: the A-66 Highway Ruta de la Plata (Benavente-Zamora) and the CM-42 Highway Los Viñedos (Consuegra-Tomelloso). Besides these, Acciona also sold its concession on the Navarre canal, which is considered one of «the largest hydraulic infrastructures in the autonomous community of Navarra», it can be read on the release issued by Meridiam. This canal comprises a 760 km irrigation system which has allowed more than 40 crop varieties to exist (i.e. corn, vineyard, sunflower, etc.) and plays an important role in the region’s economy, highlighted Meridiam in the document.

This deal is still subject to several permissions and it is expected to be concluded during the second half of 2021. Of the 484 million euro involved in this operation, 357 million euro represent the value of the holdings and 127 million euro the associated debt.

Whereas Bestinver, through its new infrastructure fund, will take minority stakes in the CM-42 Highway and in the hospitals of Ibiza and San Sebastián de los Reyes for 45 million euro, Meridiam will acquire leading stakes in all the eight assets for a total value of 312 million euro.

In a release, Meridiam assumed this acquisition shows its «commitment to invest and manage Infrastructure that provides essential services to communities in mobility and social infrastructure, two sectors at the heart of its development strategy. It also expands its footprint in sustainable infrastructure in Spain».

For Acciona, «the transaction is part of its strategy of rotating mature assets with the aim of maximizing the return on capital employed, continuing to reduce the group's financial debt and boosting new investments, as well as meeting the asset sale target announced by the company», as revealed in a release. In this operation, the Spanish company had the support of Crédit Agricole Corporate and Investment Bank, which acted as sole financial advisor.

Acciona buys €38M land for its largest project in Portugal 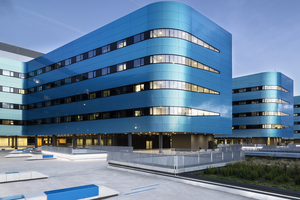