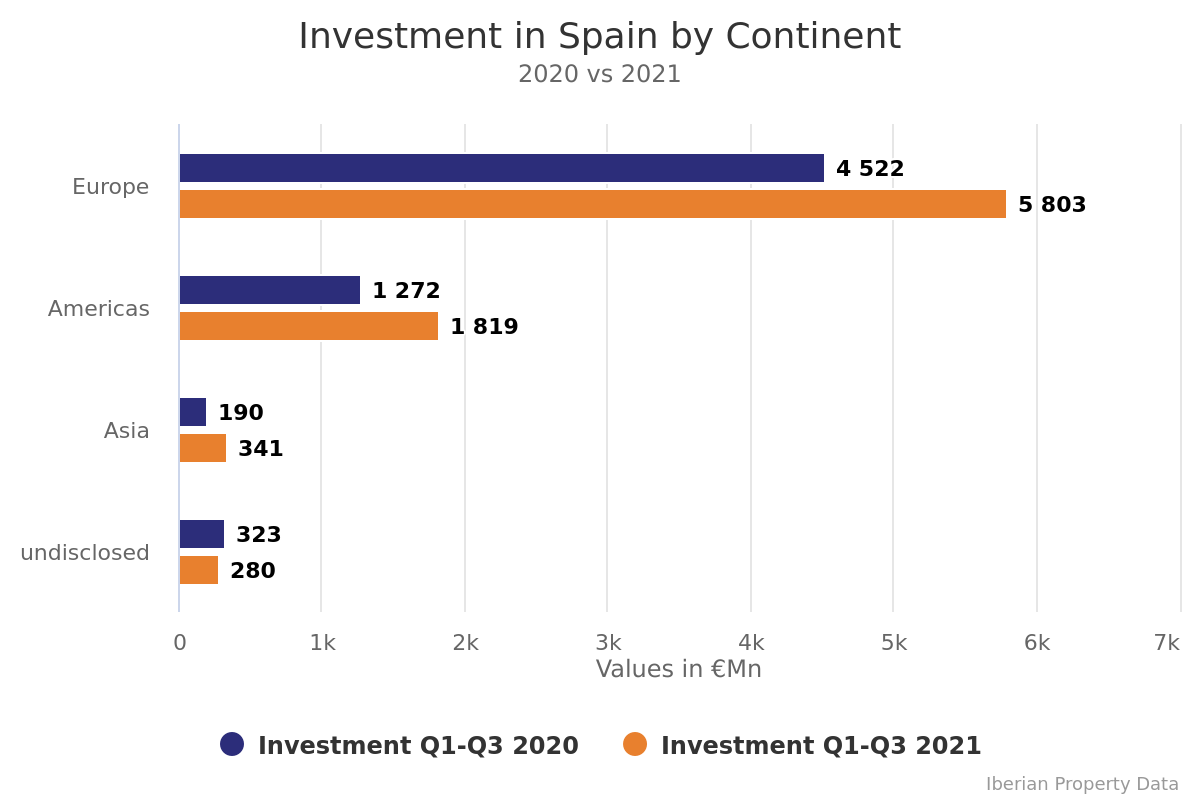 With international investment representing 76% of the capital traded between January and September 2021, in line with the 77% observed one year before, the largest share (70%, about 5.8 billion euros) of the amount invested in Spain originated in Europe. While the Old Continent lost ground from the 72% share in 2020, capital originating in North America grew 56% in absolute terms during this period, going from 1.09 billion euros in September 2020 to 1.7 billion one year later, with the share increasing from 17% to 21%. South America was responsible for just 1% of the investment this year (116 million euros), while Asia was the third most active continent, with 341 million euros and a share of 4%.

Represented by 52 entities, domestic investors were responsible for 24% of the total amount traded in the country, spending 1.96 billion euros in 78 deals, 36% more than the 1.44 billion euros spent during the same period in 2020.

However, German buyers were those who spent the most on real estate asset purchases in Spain between January and September 2021: 2.22 billion euros (distributed across 14 operations performed by 7 investors), in other words, 27% of the total and 85% more than the 1.2 billion euros they spent one year before. The third most active nationality in 2021 was North American, represented by 13 entities, with 1.04 billion euros that represent a share of 13%, dropping 5% from the 1.09 billion euros allocated until September 2020, also losing ground from the 17% share attained last year.

One of the newcomers since 2020, Canadians were the 4th most active nationality in Spain in the first nine months of 2021, representing 8% of the total amount allocated, namely, 665 million euros invested by two entities. The UK was the 5th most active nationality, with 10 investors leading 12 operations valued at 605 million euros, almost doubling (98%) the investment from the 305 million euros reported until the end of September 2020. The French were also active this year, with 7 investors closing nine operations valued at 330 million euros, although this is a reduction (-31%) compared with the 479 million euros allocated during the same period the previous year. Belgium channelled approximately 253 million euros, with this country’s investment more than quintupling from 2020.

Although to a lesser extent, the Netherlands, Hungary, Portugal, Greece, Czech Republic, Switzerland, and Sweden were the remaining European nationalities that invested, joined by Mexico, representing South America, and Israel and Singapore, for Asia.

Savills AN reinforces its retail team and increases its commercialization portfolio

Stoneshield acquires 18.5% of Neinor Homes for more than €170M

Psquared invests €6M in a building in Barcelona's 22@ district