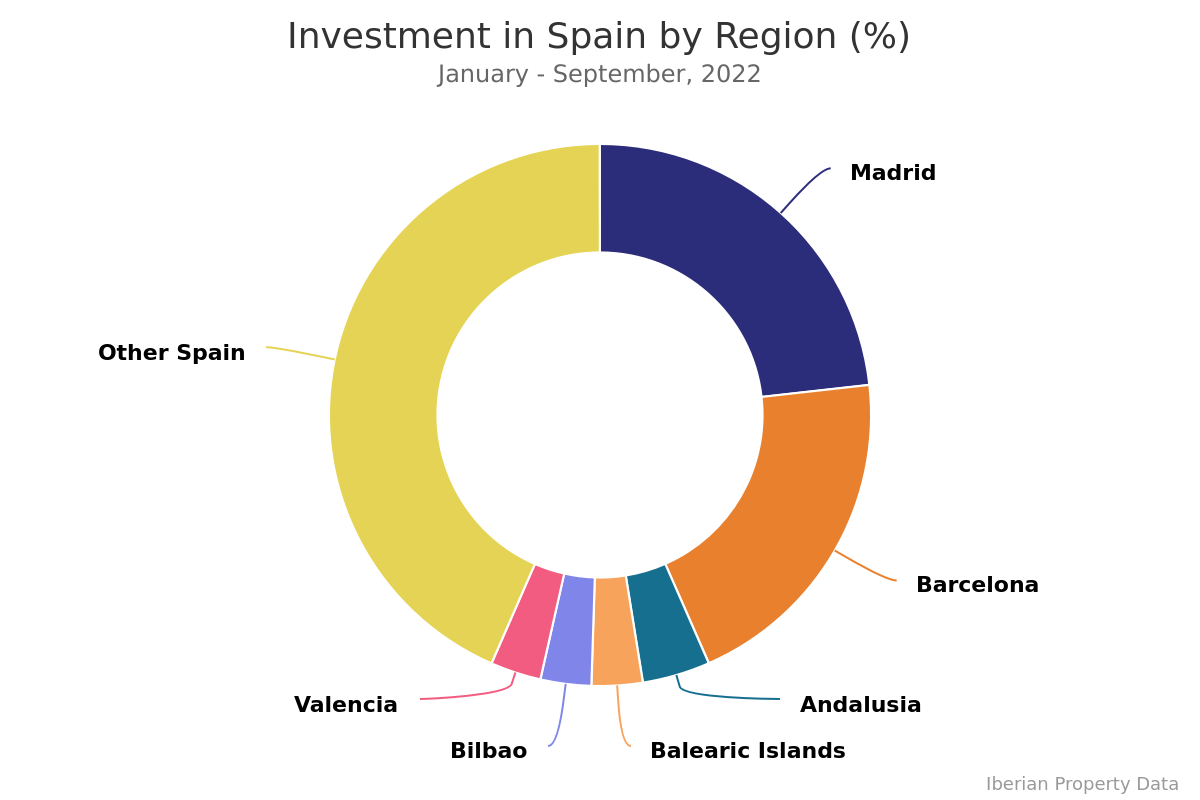 In 2022, once again we observed a trend towards decentralisation of the capital allocated to Spain, at a time when the amounts invested nationwide are growing. Thus, if in the first nine months of 2019 the Madrid and Catalonia regions concentrated 67% of the total amount invested, in 2020 this accumulated performance dropped to 55%, declining again in 2021, to 52%, and standing now at 44% in 2022.

Comparing the performance in different Spanish regions, Madrid stood out the most during the period under analysis. Amounting to 2.83 billion euros, the volume invested in this region until the 3rd quarter presented a significant increase in annual terms, surpassing by 70% the 1.66 billion euros registered one year before. However, this growth in the Madrid market still compares downwards (-3%) with the pre-pandemic period, with the amount traded in the first nine months of 2019 standing at 2.93 billion euros. Worth noting, the number of operations carried out in Madrid in the first three quarters of the year steeply recovered after a continuous decrease over the last three years, going from 63 in 2019 to 58 in 2020, 46 in 2021, and now reaching 96 deals in 2022.

By contrast, the data gathered by Iberian Property Data shows that Barcelona suffered a slight deceleration in terms of investment volume, despite the persistent increase in the number of deals carried out in the first nine months of the year: 29 in 2019, 37 in 2020, 48 in 2021, and 50 in 2022. Standing at 2.47 billion euros, the cumulative investment in the first three quarters of 2021 compares downwards (-6%) with the 2.62 billion euros registered during the same period in the previous year.

The rest of Spain displayed a strong annual growth in the cumulative investment until September, both in the number of operations and the amount traded, to 5.23 billion euros, which is partially explained by sev- eral portfolio transactions that involved assets located across all Spain.