The complex, located in the Valencian municipality of Gandía, was inaugurated in November 2008 and has a surface area of ​​32,680.80 sqm and 850 parking spaces. Currently, important operators are located there, such as Decathlon, JYSK, Kiwoko, Vision Lab, Norauto, or Max Colchon, among others.

The objective of the new owner of the complex is to "expand and enhance" its commercial, leisure and restaurant offerings. "MyO has completed a successful period of activity that should give way to a new positioning that reinforces its leadership and its adaptation to the preferences and purchasing behavior of its current and potential public," the company said in a statement.

This is the first operation completed by Batex & Duplex of a commercial asset in operation, since it mainly focuses its activity on the development of new urban commercial areas in which the criteria of "proximity and convenience" prevail.

It is currently developing six projects throughout Spain, in addition to preparing the execution of several parks. Specifically, in the Madrid town of Majadahonda, the development is conformed around an establishment of the German chain Aldi. And in Torremolinos, a new Mercadona supermarket will be installed, with a surface area of ​​3,500 sqm.

In Andalusia, in the first quarter of this year a new development will be launched in El Puerto de Santa María (Cádiz), and the new project in Malaga will house a Lidl supermarket. Also on the Costa del Sol, but in this case in the urban center of Estepona, the next construction of a commercial park is planned that will incorporate specialized retail (sports, home equipment, pets, etc.), together with fast food restaurants and a food-court. In addition, in the center of Marbella, the reform of a 7,000 sqm commercial building has been undertaken in which a supermarket, two retail establishments will be installed.

In the urban processing phase, projects continue in Córdoba and the northwest area of ​​the Community of Madrid. 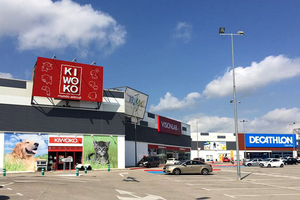