The Israeli group MDSR Investments has acquired from Barings four assets leased from Carrefour with a combined gross leasable area of ​​more than 16,000 sqm.

The London-based fund acquired the assets as part of a portfolio of ten supermarkets in December 2019. It intended to sell the non-strategic assets in the medium term, while retaining the core assets to take advantage of its strong income from locations on high-street shopping. .

In the operation, Barings has received advice from Savills and Pérez-Llorca, while MDSR Investments has been advised by CBRE and Allen & Overy.

"Having acquired these assets in December 2019, we identified an attractive divestment opportunity by taking them to the market and executing our business plan, in order to generate a good return for our investors", explains José Carlos Torres, managing director and national head of real estate investments in the Iberian Peninsula of Barings, who adds that the "preferred sectors" of the company in Spain "continue to be logistics, offices and residential real estate".

From MDSR, Annalaura Benedetti, national manager for the Iberian Peninsula, points out that "this operation continues to strengthen our presence in the Spanish retail distribution market, where we already have more than 60 assets." The Israeli fund, which has been operating in our country since 2015, began its positioning strategy in the retail segment in 2017 and last year bought, for one hundred million euros, a portfolio of 27 Mercadona group supermarkets, located in various points from Spain.

According to data from the latest report on the European food and supplies sector published by Savills, investment in supermarkets in the Spanish market has reached unprecedented levels in the last two years, representing 98% of the 452 million euros invested in the food sector in the country during 2021. 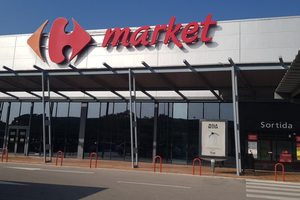