The Socimi owned by Castlelake has closed the purchase for 36.75 million euros of a building in Madrid owned until now by Mutualidad de la Abogacía. The building is located at number 26 of calle Alcalá, on the corner of Cedaceros street. The purchase has been made entirely with the Socimi's own resources, according to the statement sent by the company to BME Growth.

The property has 5,343 square meters of offices divided into two basements, a ground floor, a mezzanine, five more floors and an attic. The operation also includes the fourteen parking spaces found in the community parking at number 11 Cedaceros street.

The building was acquired by Mutualidad de la Abogacía in January 2009 and, according to the company, this operation has resulted in a capital gain on the property's net book value of 14.96 million euros, which represents a profitability of 68.65%.

Last summer, the Socimi led by Javier Illán saw its strategy supported with the entry of the Castlelake fund into its shareholding, after subscribing part of a capital increase of 250 million euros that made it the first shareholder with 49% of the capital.

Millenium plans to grow in the main Spanish tourism squares and then make the leap to Portugal, in cities such as Lisbon and Porto, and then enter Italy and Greece. The Socimi currently has ten assets and 1,268 rooms. 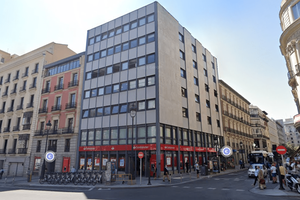