The student residence is located on the University of Granada's largest campus and is currently being redeveloped and expanded to a residence with 347 units (354 beds). Completion and commissioning are planned for Q3 2020.

The brand-new student complex will also offer various communal areas such as study areas, a library in the building's former chapel, a canteen managed by Sodexo, a swimming pool, a soccer court, a basketball court, a paddle court, a laundry, vending machines, a Wi-Fi network, reveals Xior in a press released.

The operational company of the seller and developer of the project, Amro Estudiantes, will run the residence for the first two academic years based on a triple net lease. After this two-year period, Xior will take over operation.

Quote by Christian Teunissen, CEO of Xior Student Housing: «We are proud to continue our expansion on the Iberian peninsula in 2020 with another fantastic acquisition. With this acquisition, not only are we adding a fantastic new city to our rapidly growing Spanish portfolio, but we are acquiring a brand-new residence situated in the best location in the city, developed according to the latest insights and adapted to students' needs and wishes. In other words, it is a perfect fit with Xior's philosophy. In addition, the lease with the Amro Estudiantes team gives us the opportunity to manage the ramp-up period and the roll-out of a local operational team as efficiently as possible both in terms of risks and operational and management impact».

Quote Raj Kotecha, Managing Director of Amro: «We believe the Granada asset sets a new standard for student housing properties in the Spanish market. We are delighted to have completed the sale to Xior Student Housing and look forward to working with them during the operational phase».

On this operation, Xior was advised by CBRE and Amro Estudiantes by Savills. Xior is a Belgian real estate investment trust (BE-REIT) specialised in student housing in Belgium, the Netherlands, Spain and Portugal.

Student Properties expands its portfolio while being purchased

Amro completed the sale of Granada student residence for €37M 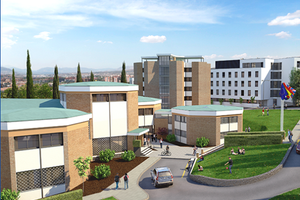