This operation concludes the investment carried out by Tander in October, when it acquired a set of four shops for 20.9 million euro within the same buildings where the shops it bought now are located.

The 9 shops were purchased from Portuguese developer Avenue, and they are all located within building Liberdade 203, with a total combined area of 3.015 sqm. The sale was carried out in two stages, the deed for 4 of the 9 shops, including Dsquared2 was signed on the 16th of October and during the second stage, on the 15th of December, the deed for the remaining 5 shops, including Lúcia Piloto and Wines by Heart was signed.

For Aniceto Viegas, Avenue’s general manager, this sale «reinforced the confidence Tander has in Avenue. Last year we were the chosen partner for their first investment in the country with the acquisition of four shops at Aliados 107, in Porto», he recalled.

Cushman & Wakefield and JLL advised this deal. Carlos Vieira Neto, Associate at C&W’s investment department stated that «we are very happy for being involved, for the third consecutive year, in the largest high street retail transaction within the Portuguese market. Within a challenging context for the market, this transaction confirmed once again that the retail segment remains relevant and in great demand by referential investors, who trust it to obtain competitive and resilient returns».

Marlene Tavares, Head of Retail & Logistics Investment at JLL, stated that: «we share the satisfaction of all parts involved in this high street retail market referential transaction, led and concluded within a very particular context, showing the quality of project Liberdade 203 and reinforcing Portugal’s high street retail market’s fundamentals».

Last update with more information at december 22nd, 9 am 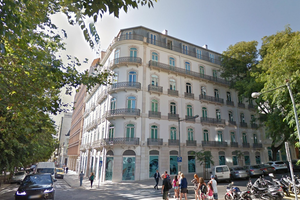