The resale of this office complex, which incorporates nine buildings, had already been announced in July, when the adjudication of the asset – which was under collective insolvency –  was approved in court, by being integrated into the society controlled by the Reuben brothers, Sorlinda Investment and represented an investment of more than 3.000 million euro.

This business park is located at Av. de Cantabria in the city of Boadilla del Monte next to Madrid, became part of Sorlinda Investment’s portfolio last year, after the company presented the best offer – 3.023 million euro – in an auction. On this race were Banco Santander bank with a lower bid, 2.971 million euro and Arab fund AGC which offered 2.850 million euro.

The interest in retrieving this asset from the Spanish bank’s president Ana Botín, intensified at the beginning of the year, when the Spanish norm IFRS 16 – which penalises long-term rentals – came into effect, explained newspaper El Confidencial. It should be noted that Santander committed to occupy the complex for 40 years when it sold it, in 2008, to Marme Inversiones for 1.900 million euro. The asset was auctioned in 2014, after Marme defaulted on the payment of the loan used to acquire the asset, recalls Spanish newspaper Cinco Días.

Santander places two portfolios worth €5.700M on the market 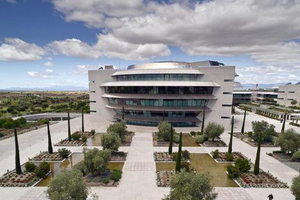