This Monday, OHL signed the contract for the sale of shares and assignment of receivables in relation to the sale of its stakes to a fund managed by DIF Capital Partners. Specifically, it has sold 33.34% of the share capital of Nuevo Hospital de Toledo S.A. and 100% of the share capital of Mantohledo S.A.U., which participated with a 33% stake in the joint venture operating said concession.

In a release sent to CMVM, OHL advanced that the initial price for this operation was set at 76.1 million euro, but «this price will be increased by a variable amount of interest that will be calculated based on the closing date and the settlement of the transaction». And it further informed that «the closing of the transaction is subject to certain customary conditions to this type of deals».

Newly inaugurated, this new unit was built by a joint venture between OHL, Acciona and ACS. It has a built area of more than 245.000 sqm which are distributed by seven buildings organized around a central street that functions as a public space and connects the various hospital services. In a note, OHL advanced that, this centre features 1.142 beds - of which 760 are for hospitalization and 382 for other uses -, 368 consultation rooms, 97 examination rooms, 120 outpatient posts, 42 emergency observation posts and 65 treatment posts and examination boxes.

This new University Hospital of Toledo will serve more than 434.000 inhabitants in 116 municipalities in the province of Toledo and is already considered «the largest hospital complex in Europe», it can be read in the document.

Spanish OHL has nine decades of experience in the hospital sector translated into more than 150 new hospitals -equivalent to 6 million sqm, approximately, and more than 60.000 beds, close to 100 health centres and more than 200 renovation and rehabilitation activities. The activity, initiated in Spain, extends to countries such as the US, Chile and the Czech Republic, Portugal, Mexico, Argentina, Ecuador, Uruguay, the Antilles and Ireland. One of its latest projects in Spain is the University Hospital of Burgos, developed under a public-private partnership.

OHL is looking for a partner for its developer 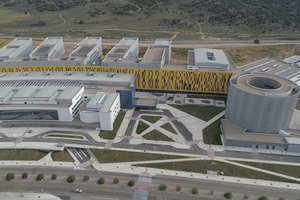 33.34% of New University Hospital of Toledo