The company which will occupy this space in the future will be bank Santander itself which had been the owner of the complex up until 2012, as revealed by market sources to newspaper El Confidencial, which further reported that this operation was advised by Colliers Internacional.

The Centro Canalejas is a 19th century iconic complex located at the heart of Madrid, which was recently refurbished. This complex, which features 7 buildings, should now hold a 3 floor commercial gallery with 15.000 sqm spread across 100 retail spaces, 22 luxury dwellings (occupying 7.000 sqm) and a 5 star hotel with 200 rooms (26.000 sqm), which should host the first Four Seasons in Spain. Besides these spaces, the complex also has 400 parking spots spread across 14.000 sqm.

Shoppings: Spain has more than 1M new sqm in pipeline

Nuveen and Kronos join together to invest €1.000M on build-to-rent

OHL is looking for a partner for its developer 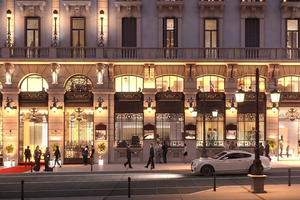