The 12 floor building is located at number 42 Calle Cardenal Marcelo Spínola in Madrid. It has around 8.875 sqm and it is currently fully occupied.

The full occupation of the building was achieved by the American company while managing the asset, as revealed by the Spanish newspaper El Economista this Wednesday. With the support of Knight Frank – which advised the operation on its behalf – Invesco managed to attract companies such as OPD Energy, Walmeric and Marco de Comunicación to install their offices in the building, reaching maximum returns on it.

This change was one the factors that valued the asset in 40% in less than a year.  It should be recalled that this building was acquired by Invesco from REIT Lar España for 37 million euro in January. Lar España also contributed to the asset’s valuation, investing 9 million euro in its full refurbishing.

Invesco was one of the protagonists within the Spanish real estate market last week with the purchase of office building Arturo Soria 125 for 21.5 million euro, which should be transformed for residential use.

Grupo HNA and Mutualidad de los Arquitetos also follow a strategy of investment in Spain, having acquired two assets this year. The latest was the purchase of a logistic platform in Guadalajara for 10.5 million euro and the other transaction allowed it to add the La Liga headquarters to its portfolio.

Invesco RE reinforces its logistic portfolio with park Palm-M40

Invesco adds building Arturo Soria 125 to its portfolio for €21,5M 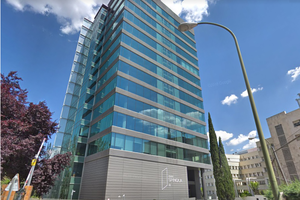