Image of the four-star hotel Mossaic

This four-star hotel establishment that has 71 double rooms, 3 suites and 9 junior suites, was a project of Juan Antonio Roca, former advisor and former manager of Urban Planning of the Marbella City Council.

In addition, the foreign fund has also acquired for 800,000 euros, the exploitation rights of the underground car park located under the town hall square, which is still the owner of the car park.

The hotel is completely renovated and ready for operation, after an ambitious reform recently completed and that has cost 1.2 million euro. These reforms were carried out after the floods of the last autumn in Los Alcázares affected the hotel infrastructure.

The mayor of Los Alcázares has indicated that «this is not only the largest private investment that has been made in the municipality in recent years, but it will reactivate the local economy with a new boost to quality tourism.»

Expo Hotel Valencia is being negotiated for more than €30M 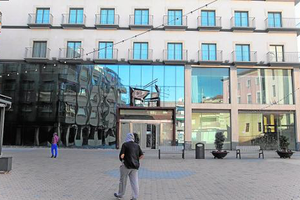