Acciona Inmobiliaria was awarded a large plot of land with a little more than 21.000 sqm, a former asset from dissolved company Reyal Urbis. The terrain is located in Arpo (Pozuelo Oeste Distribution Area), the last large urban land, along with Montegancedo, which still hasn’t been developed within the Community of Madrid’s municipality of Pozuelo.

The asset consists of a lot composed by 12 parcels estimated at 10.7 million euro, with a total combined area of around 74.500 sqm and 21.800 sqm buildability, to construct 200 dwellings, as reported by El Confidencial. The same sources, which calculate at between 900 and 1000 euro per sqm the amount spent, assure that the company will use the terrain to build 74 unsubsidised dwellings and 123 affordable housing dwellings, a parcel for commercial use and three other parcels for single-family dwellings.

With this acquisition, Acciona Inmobiliaria strengthens its position in this segment, where terrain owners Solvia (Oaktree), Pryconsa, Metrovacesa, Vía Célere, Tavie Investment and iKasa also stand out. All own large terrains within the Community of Madrid, six million sqm in total, which will allow for the construction of 5.500 dwellings for distinct uses of unsubsidised, affordable, low density and single-family housing.

These terrains have been, for more than a decade, under the development segment’s radar, but also under the sights of a significant part of the wealthy demand which, faced with the lack of terrains within the municipality and o new construction works, was diverted to other nearby municipalities, such as Boadilla del Monte, Las Rozas and Majadahonda. One of the main obstacles, the construction of a rainwater collector, seems to have already been overcome.

Acciona Inmobiliaria’s acquisition also shows its bet on the housing market. After having tried, five years ago, to let go of its real estate business, the group owned by the Entrecanales family bet once again on housing development. Last year, it signed with Hines a 63 million euro contract to develop 400 dwellings for rent in Valdebebas, a segment on which the big developers have been investing.

ALL IRON RE I Socimi acquires property in Seville for €9.8M 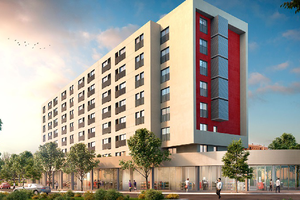