The operation, advised by Colliers, was structured over a 25-year leasing agreement starting from when the building will be fully constructed in 2024. The campus will be specialised in design, audio-visual arts and creative industry management and will have the capacity for 2.000 students.

«This operation shows the continuous appetite to invest in Barcelona and, in particular, in district 22@, which remains an attraction hub for segments such as the technological, services and educational, with the presence of companies which lead their respective segments», stated Diego Oliver, director of Colliers’ Barcelona office.

«In this second semester there will be several operations in Barcelona, since we started having a strong investment activity once again, following a 2020 full of uncertainty and with little investment», pointed out the director. «For the remainder of the year, office investment in Barcelona will continue on the same levels as the ones reached during the first semester, more than 600 million euro», sustained Oliver.

New Farfetch office to open until 2025 in Matosinhos 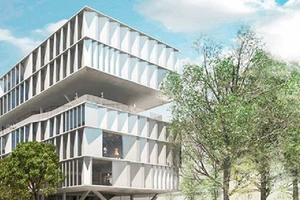